My addiction to drugs started at the young age of 12.

This is a crucial age because this is where you start to form an identity for who you are. And at that age my family were into drugs and alcohol, so I thought it was ‘normal’. (You can read more of my story here)

It’s coming up to the 10 year anniversary of my conscious decision to move away from my family and friends on the Gold Coast. Although I had grown up on the coast and really loved all things about it – the surf, the friendships, my family, my footy club and the laid back lifestyle – there was one aspect that I didn’t love, and that was the drug culture.

It was October in 2005 and if you’re familiar with the Gold Coast, it was Indy time (which meant for me time to take drugs and alcohol).

So I was on a 5 day bender, I hadn’t slept for 4 nights and I was high (mainly from ecstasy). And after taking drugs consistently for 5 days, I knew coming down would be hard.

Pre-empting the come down, I had bought an ounce of weed for me and my mates. After smoking all of that weed in a couple of sittings, I still couldn’t come down.

I lay in bed looking at the ceiling, wondering if I was going to survive the night, let alone be able to work the next day.

This was one of the first times I realised that I couldn’t shake the drugs. I knew I was heavily addicted, I just didn’t want to admit it. The drugs controlled me and consumed me.

This was a massive turning point in my addiction recovery: I had hit rock bottom.

Have you ever heard the quote, “If you’re in a hole, stop digging?” Well, for me I had dug a pretty deep hole and it was time to stop digging.

It was either stop taking drugs on my own or go to rehab.

For me, my “rehab” was to put all of my attention in to one thing, and that was football.

It was only weeks after this breakthrough that an opportunity appeared. I signed a contract with East Tigers, a rugby league club in Brisbane, who also had connections with the Brisbane Broncos. 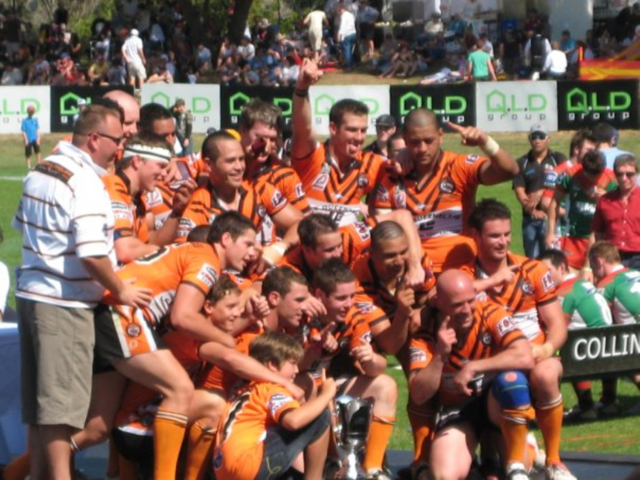 Moving away from the coast was the best thing for me to do, but at the same time it was very hard, as all of my friends and family were there.

However, I had to choose – could I stay in the environment that exposed me to drugs and alcohol on a regular basis or should I save my life?

So as much as I didn’t want to leave, there was no way I could stay.

We are all faced with choices in our lives, some more challenging than others.

But big or small, as long as we know what we really want and why we want it, the decision becomes easy.

What’s 1 choice that you can make today that will help to move you towards a better you tomorrow?

I’m so fortunate that, not only was I able to change my own life, but I now get to transform the lives of other people everyday. My next 12 week Transformation Challenge is kicking off next month and I only have 7 spots left. So, if you’d like the opportunity to work with me and a group of amazing people on a similar journey, please join us!